Which Sherry Is Right for You?

Which Sherry Is Right for You?

Sherry may very well top the list of the most famous wines that many wine drinkers have never tried ... but should! Ranging from bone dry to decadently sweet, it has many personalities, each of them offering a unique experience for the adventurous wine lover.

Sherry is a complex category of wine that encompasses seven different styles. These are manzanilla, fino, amontillado, oloroso, palo cortado, cream and Pedro Ximénez. Made primarily from the Palomino grape, Sherries are produced either oxidatively or non-oxidatively, utilizing a fractional aging and blending process called the solera system.

Where is Sherry Produced?

Sherry is only produced in the Spanish appellation of Jerez, located in a southern coastal section of the province of Andalusia. Every bottle carries three names: Jerez (pronounced HARE-eth), Xérѐs (the original Phoenician name of the region), and Sherry. The latter is the end result of a series of British mispronunciations of Jerez. Since the British were instrumental in the spread of Sherry around the world, that name stuck quite firmly.

Only three grapes are used in Sherry production, all of them white. Moscatel (known elsewhere as Muscat of Alexandria) is a minor grape grown in the sandy arenas soil of the coast and used for sweet wines. Pedro Ximénez, often called PX, is another minor variety grown in clay-based barros soil further inland; it is used for incredibly rich, sweet wines of the same name. Last but definitely not least is Palomino, responsible for 95% of all Sherry. Producing massive clusters and enormous yields, this variety grows in chalky albariza soil.

How Sherry is Produced

There are two primary methods for producing Sherry, oxidative and non-oxidative. In the former, wine is exposed to oxygen during the aging period, picking up distinctive nutty characteristics. In the latter, used for manzanilla and fino Sherries, the wine is protected from air by a foamy, waxy layer of living yeasts called flor, which floats on top of the wine in a barrel that is 75% full. Unlike typical fermentation yeasts, these consume alcohol and oxygen rather than sugar. One byproduct of this action is acetaldehyde, a compound that gives these Sherries their distinctive tangy aroma.

Any discussion of Sherry is woefully incomplete without mention of the solera system, which is a multi-barrel method of fractional blending and aging. Each type of Sherry has its own solera, and here’s how it works. Imagine rows of barrels stacked on top of each other. The bottom barrels (called the solera) contain the oldest wine, and a portion of this is drawn off when the producer needs to bottle. The empty space is then filled with wine from the next level of barrels, called the 1st criadera (Spanish for nursery). These barrels are topped up with wine from the 2nd criadera, and so on. Barrels are never emptied, and the top layer of barrels is replenished from newly produced wine called sobretable. As one might imagine, a sizable solera can result in wines with impressive complexity. 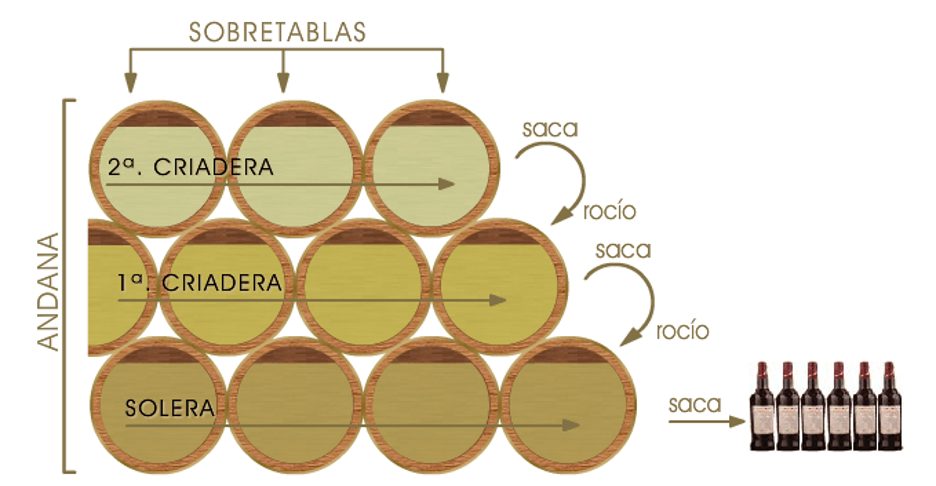 These, then, are the seven types of Sherry:

• Manzanilla. Produced only in the seaside town of Sanlucar de Barrameda, this is a type of fino (made in the presence of flor) that is especially redolent of the ocean, with a salty, sea-spray quality and a floral tone reminiscent of chamomile. These are dry wines, but also delicate and crisp that should be well chilled and enjoyed within a day or two. Fortified to 15-17 percent alcohol.

• Fino. The classic dry Sherry, tangy and yeasty, with almond notes. Like manzanilla, fino is a light-colored wine that is terrific with olives, nuts, and seafood, especially when served cold. 15-17 percent alcohol.

• Amontillado. This is an intentional hybrid style that begins as a fino, typically spending four to six years moving through its solera. Then it is fortified to a higher abv (alcohol by volume), which kills the flor. At this point the wine is transferred to a different solera, where it begins oxidative aging. This process lends amontillados their darker, amber color, plus notes of roasted nuts, tobacco, spice and dried fruit ... along with the tangy qualities of a fino. These may be dry or have a bit of PX added for a touch of sweetness. 16-22 percent alcohol.

• Oloroso. Made in a strictly oxidative style, olorosos are quite dark in appearance. They are full-bodied, dense and complex, with an intensely nutty character and smooth texture. Usually very dry reds, these also occasionally see a drop of PX for balance. Oloroso is often served at the conclusion of a meal, perhaps with hard cheeses. 18-20 percent alcohol.

• Palo Cortado. Rare and mysterious, palo cortado is the “accidental” sherry. This style begins life under flor and is initially intended to become fino or amontillado. Then, for reasons that are not understood, it loses its flor before fortification and begins to evolve oxidatively like an oloroso. The end result is a wine of tremendous elegance and complexity, with a lush texture and aromatic and flavor components that evoke those of both amontillado and oloroso. 17-22 percent alcohol.

• Cream. Cream Sherry is made by sweetening an oloroso base wine to 11% residual sugar or more. These can be enjoyed as an after-dinner drink or a dessert wine and can carry flavors of fig, chocolate, dried fruits and roasted nuts. A lighter version called pale cream sherry is also made. 15.5-22 percent alcohol.

• Pedro Ximénez. PX of course is made from the grape of the same name. The berries are air dried on mats for a week or two, thereby concentrating the sugars. After partial fermentation, the juice is fortified and introduced to a solera. These are dark, intense dessert wines that end up 40 to 50 percent residual sugar, carrying robust flavors of molasses, raisins, toffee and fig. A fabulous dessert wine on its own, it is sometimes poured over ice cream for an even more decadent treat. 15-22 percent alcohol.

Visit our full list of Sherry to shop all!

Internet Explorer is no longer supported.
Please use a different browser like Edge, Chrome or Firefox to enjoy all that Wine.com has to offer.

It's easy to make the switch.
Enjoy better browsing and increased security.